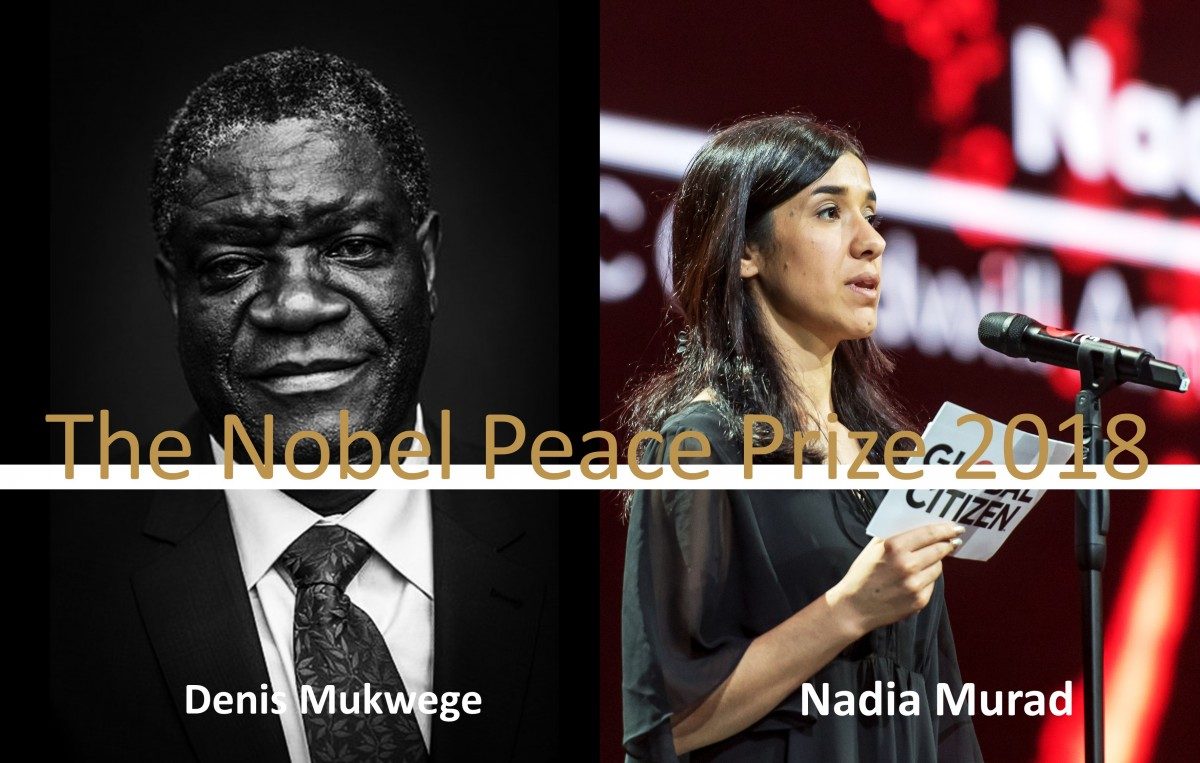 The Nobel Peace Prize 2018 was awarded jointly to Denis Mukwege and Nadia Murad “for their efforts to end the use of sexual violence as a weapon of war and armed conflict.” Their contribution is focusing attention on, and combating, such war crimes. Berit Reiss-Andersen, Chair of the Norwegian Nobel Committee, said “If we want people to say ‘no more war’, we have to show how brutal it is” in interview.

She also said, “Denis Mukwege is the helper who has devoted his life to defending these victims. Nadia Murad is the witness who tells of the abuses perpetrated against herself and others.”

“Each of them in their own way has helped to give greater visibility to wartime sexual violence, so that the perpetrators can be held accountable for their actions.”

Denis Mukwege: “Justice is for Everyone”

The physician Denis Mukwege, a gynecologist and surgeon, has spent large parts of his adult life helping the victims of sexual violence in the Democratic Republic of Congo. Since the Panzi Hospital was established in Bukavu in 1999, Dr. Mukwege and his staff have treated thousands of patients who have fallen victim to such assaults. Most of the abuses have been committed in the context of a long-lasting civil war that has cost the lives of more than six million Congolese.

(CNN) Mukwege said he was in the middle of carrying out surgery in his hospital when he heard that he had won the award — and that he dedicated it to all survivors of sexual violence around the world.

“For almost 20 years I have witnessed war crimes committed against women, girls and even baby girls not only in my country, the Democratic Republic of Congo, but also in many other countries,” he said. “To the survivors from all over the world, I would like to tell you that through this prize, the world is listening to you and refusing to remain indifferent. The world refuses to sit idly in the face of your suffering.” He added that he was honored to be named alongside Murad, whom he praised for her strength and courage.

“Denis Mukwege is the foremost, most unifying symbol, both nationally and internationally, of the struggle to end sexual violence in war and armed conflicts. His basic principle is that ‘justice is everyone’s business,'” said Reiss-Andersen.

Nadia Murad: “Decide to be Honest”

Nadia Murad is herself a victim of war crimes. She refused to accept the social codes that require women to remain silent and ashamed of the abuses to which they have been subjected. She has shown uncommon courage in recounting her own sufferings and speaking up on behalf of other victims. In 2016, at age 23, she was made a UN goodwill ambassador for the dignity of survivors of human trafficking.

(CNN) Murad was in Cambridge, Massachusetts, when she learned she had won the prize. “I hope that it will help bring justice for those women who suffered from sexual violence,” she told a Nobel official.

In August 2014, the Islamic State (IS) launched a brutal, systematic attack on the villages of the Sinjar district. In Nadia Murad’s village, several hundred people were massacred. The younger women, including underage children, were abducted and held as sex slaves. While a captive of the IS, at her age 21, Nadia Murad was repeatedly subjected to rape and other abuses. Her assaulters threatened to execute her if she did not convert to their hateful, inhuman version of Islam. (The world support to eliminate #CoerciveConversion, another article) After a three-month nightmare, Nadia Murad managed to flee.

If you want to feel more vividly about the brutal situation, it is helpful to read her article. (The Guardian) This article begins with the sentence ‘The slave market opened at night.’ I admire her for her courage to tell the truth. Nadia Murad said “Deciding to be honest was one of the hardest decisions I have ever made, and also the most important.”

International law will change the world Berit Reiss-Andersen said, This year marks a decade since the UN Security Council adopted Resolution 1820 (2008), which determined that the use of sexual violence as a weapon of war and armed conflict constitutes both a war crime and a threat to international peace and security. This is also set out in the Rome Statute of 1998, which governs the work of the International Criminal Court. The Statute establishes that sexual violence in war and armed conflict is a grave violation of international law. A more peaceful world can only be achieved if women and their fundamental rights and security are recognised and protected in war.

Alfred Nobel’s will
On 27 November 1895, Alfred Nobel signed his last will and testament. Nobel’s will said prize should be given to “the person who shall have done the most or the best work for fraternity between nations, for the abolition or reduction of standing armies and for the holding and promotion of peace congresses.”

This year’s Nobel Peace Prize is firmly embedded in the criteria spelled out in Alfred Nobel’s will. Denis Mukwege and Nadia Murad have both put their personal security at risk by courageously combating war crimes and seeking justice for the victims. They have thereby promoted the fraternity of nations through the application of principles of international law.

So far, international law has not ended the war. So many people had to suffer and be sad because there was no peace. But they have the ‘Right to Peace’. In 2018, the Universal Declaration of Human Rights (UDHR) recognized the Universal Declaration does not include a separate article on “Right to Peace”. Already, HWPL is creating a new order for the world. The purpose of the Declaration of Peace and Cessation of War (DPCW) is to end the war. If so, war crimes can be eliminated. Actually, DPCW has an article to end the use of sexual violence as a weapon of war and armed conflict.

Not at all, Law experts agreed that the DPCW is fully aligned with the UN Charter & the UDHR and this Declaration not only encapsulates and supports all of the 2030 Sustainable Development Goals (SDGs).

1. States should solemnly reaffirm that they refrain from the use of force in all circumstances, save where permitted by international law, and should condemn aggression as constituting an international crime.

3. States should prohibit any act or threat of violence, whatever its motives or purposes, that occurs for the advancement of an individual or collective criminal agenda.

2. States have the duty to refrain from any forcible action that deprives peoples of their rights to self-determination.

Onward to a World of Lasting Peace!

DPCW has articles to make a world of lasting peace. Regardless of their nationalities, ethnicities, and religions, DPCW will pave the way for developing peace processes in our world at both national and international levels. The reason of 80% of whold war is Ideology and Religion. DPCW is a fundamental and powerful solution. 4. States should promote a culture of peace including ensuring conditions in which-
(a) citizens are able to participate in the political affairs of the state as equals regardless of religious or ethnic differences;
(b) a free media is maintained which allows grievances to be aired and addressed;
(c) education is imparted to promote respect and mutual understanding among different religious, belief and ethnic groups;
(d) the right to development of peoples, including the achievement of the UN sustainable development goals, can be realized; and
(e) the wellbeing of all human kind with the participation of women and men to ensure peaceful coexistence amongst nations, states, and peoples may be guaranteed.

Worldwide Supports of the DPCW

“Youth and women can become the most persuasive advisories of peace in the present and in the future. Both avoiding war and establishing peace-building processes require a laborious effort to create a culture of solidarity outlining a pragmatic style in which the statements should followed by effective actions. I believe that the Declaration of World Peace proclaimed in Seoul can get everyone around the world, no matter if they are men, women, youth or children, ready to unite under the mantle of peace and take the responsibility to promote the message of peace to the entire world. We are one.“

“It is necessary for the two leaders(Kim Jong-Un and Moon Jae-In) to meet and discuss face-to-face. I believe that we can understand one another and accept each other’s differences through cultural exchanges, such as music and sports.”

Also, he emphasized “Presenting the Declaration of Peace and Cessation of War (DPCW) to the United Nations as a resolution, with our intention to build peace in the world, is novel and important.”

Mr.PravinH.Parekh, President of the Confederation of Indian Bar

“Today one country saying ‘yes, Chairman Lee I accept your declaration’ is not enough, even 10 countries saying this is not good enough. Therefore, we need the United Nations.

He declared support for the DPCW on behalf of the Baltic-Black Sea Board of Directors. He stated, “The MOU and MOA express our intention to work together in this important issue. Sometimes we can think that this problem or question of promoting peace is difficult or sometimes we can think that is very utopian, but we shouldn’t forget that there are many international or law organizations that unfortunately today, even the UN, do not function according to the purpose for which it was established.

So that brings the threats to all humanity…. We cannot ignore these facts. So, in our work together we should take into consideration this reality. With all of that, we eagerly support the DPCW and we really believe that it is a very important declaration,” reaffirming support for the adoption of the DPCW at the UN.