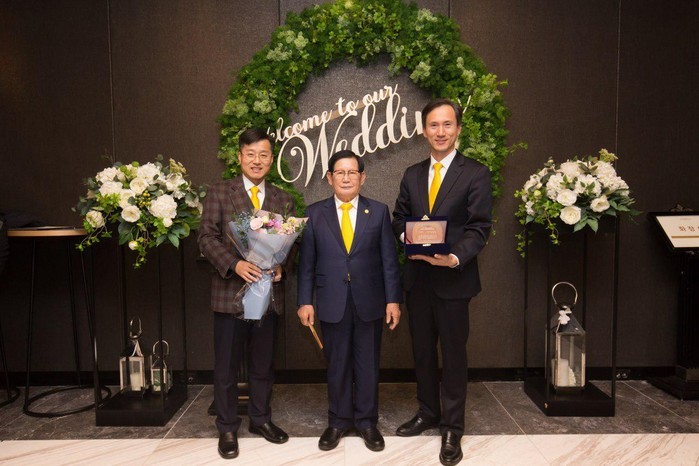 What year? What do you think the most important things were in this year? Maybe, I think 2018 is the 70th anniversary of the Universal Declaration of Human Rights, adopted by the UN on 10 December 1948. Also, there had been various incidents over the world, but there had been progress in inter-Korean relations, the only divided nation.

When can we enjoy peace in full? Like Michelle Bachelet, the UN High Commissioner for Human Rights, said “Recent memory is replete with multiple examples of genocide, war crimes and crimes against humanity.” There is still much to be desired. The human rights of millions are still being violated on a daily basis.

What should we do? How nice it would be to get rid of the war?

However, there were people who made a lot of efforts for peace between the two Koreas.

When the leaders of the two Koreas were having their third summit, Heavenly Culture, World Peace, Restoration of Light (HWPL) chairman Man Hee Lee brought together more than 1,500 world-class political and religious leaders as well as peace activists in Incheon, South Korea, to reunite the two countries. Influential people from all over the world gathered to discuss how to achieve peace at the 2018 HWPL World Peace WARP Summit.

The Chairman Man Hee Lee said “It’s embarrassing to see the country is still divided. I believe the president of South Korea [Moon] and the leader of North Korea [Kim] know about this conference and I urge them to support us to achieve peace.” Is he a high-ranking civil servant? Nope. But it makes sense for him to say so. Because he is a veteran of the Korean War. It is unprecedented for a civilian to do such a thing.

So he is awarded the Seoul Peace Culture Award

Mr. Man hee Lee of HWPL is awarded the Seoul Peace Culture Award. It’s a prize for people who contribute greatly to mankind and his influence is worldwide. It began in 2007 and was established to leave the people’s will and belief in the eternal peace of the world’s human welfare and the global village.

In their acceptance speech, The Chairman Lee asked “HWPL’s proposal to end the war effectively through international law prohibiting the production of weapons and war is now recognized by the international community as an effective alternative to ending the war,” And he continued, “Now, please cooperate with HWPL to achieve a peaceful unification of the Korean Peninsula.”

In particular, through a joint discussion with legal professionals around the world, a campaign is underway to establish an international law for peace, in which one million people from 170 countries participated, based on the Declaration of Peace and Cessation of War (DPCW).

On September 19th, ‘2018 IWPG International Women’s Peace Conference’ was held by female leaders from around the world as part of the 2018 HWPL World Peace Summit: 4th Anniversary of the WARP Summit. In the conference themed, ‘The Role of Women to Realize Peace in the Korean Peninsula and World Peace’’, Former President, Professor, current and former heads of state and First Ladies, ministers, members of the National Assembly, and 380 female leaders gathered to find practical solutions for peace.

Lastly, Chairman Lee of HWPL gave a special request to those in attendance stating, “The strength of one person, is only that one person’s strength. But if we come together for this work of peace, then it will become a great power. Everyone woman living in the global village should become one through the common objective and shout together with a common voice. You should write letters to former and current presidents. We need to write not only to our president but to those all over the world.”

He then continued, “Also you should tell not only the people of your own countries but the people from other countries as well about the method of becoming one together with the women of the IWPG. Two is more powerful than one, but if there are many it will never be broken. Since the goal is peace, nothing is more precious and important than the work of making the world of peace that can be left as a legacy for future generations. I believe in the women’s group and the youth group.” After finishing, he shouted “We are one!”, urging all participants to become one.

He is a really qualified person to say these words when we think Man Hee Lee biography. Now, what is left is our action! We Are One!

The International Women’s Peace Group (IWPG) held several memorial services across the world in honour of the late Ji-In Gu – a young South Korean woman who passed away while being forced conversion. The memorial service took place 49 days after Gu’s death (December 2017) which is a Korean tradition and was held in Cape Town, Johannesburg, Port Elizabeth, Harare, Zimbabwe, as well as in Windhoek, Namibia. On January 28, 120,000 South Koreans also protested in major cities against coercive conversion program by the Christian Council of Korea. (More info) Not only in South Africa, the memorial service has been held in the LA, United Kingdom, and other parts of the world for a year.

Especially during November and December this year, New York Times and other leading press reported with the headlines “Ban Coercive Conversion,” and shared the events of the late Ji-in Gu.

Why is the memorial continuing?

As we celebrate the first anniversary of memorial, why is it reported by the leading foreign press? Why is the memorial continuing? That’s because nothing has changed in a year and the government hasn’t responded. Why?

Sometimes religious suppression occurs in war and emerging countries, but no one would think that Murder by coercive conversion occurred in the South Korea, K-pop’s home country. So far, the number of victims is over 1,000. 52 percent of them claimed they were imprisoned. (The AVCCP statistics) In addition, 42 percent of the victims were taken to coercive religious conversion program by kidnapping. After this anti-humanitarian act, one conversion pastor of the CCK even received up to $894,425 USD. How can this illegal thing still happen?

Second, Conversion pastors cowardly evade the law by using the excuse of ‘counseling’.

They claim that these consultations on “cult issues” are carried out voluntarily at the request of the family members of the victims and with the consent of the victims. However, victims report that the “conversion education agreements” are written by force while they are under confinement. So Human rights activists and IWPG members around the world have continued to petition for the Korean government to enact a special law against coercive conversion program.

In a similar case, 1,000 Pakistani girls are kidnapped and forced to change religion every year. Muslims only just said “It was to encourage cults to accept the Islam.”Many human rights activists spoke out, and in the end the government made a anti-conversion law.

In November 2016, the Sindh province passed a law criminalizing forced conversions to, according to the law, ‘provide protection for those who are victims of this abhorrent practice.’ Under the law, those convicted of forcibly converting others receive a punishment from five years’ imprisonment to a life sentence.

Why hasn’t anything changed in a year?

Because the Christian Council of Korea (CCK) is trying to hide the truth, not only by neglecting the law and looking the other way, but by supporting its affiliated pastors’ illegal activities. Politics and religion have the cozy relations, which violates Article 20-2 of the Constitution of the Republic of Korea, “Religion and politics are separated.” Who will console the pain that 1,000 victims of coercive conversion in Korea have experienced? Who can compensate for Ji-in’s death?

Furthermore, HWPL has already vehemently protested against the CCK, which has abandoned its function as a religious organization, and its affiliated pastors for conducting anti-nation, anti-society, and anti-peace acts that violate human rights. The CCK must to be disbanded for throwing the Korean people, as well as the international community, into chaos, and the pastors who took part in coercive conversion must receive the proper punishment for their actions.

Reverend Thamsanqa Mvambo, President of the NICSA, said, “This is a terrible outrage that such people who claim to be believers in Jesus Christ would act in this way using the weapons of the devil against fellow Christians. The CCK and Conversion Pastors should repent immediately.”

I # RememberGu to Ban Coercive Conversion

Human Rights is up to you :0 Good luck!