The 3rd Annual Commemoration
of the WARP Summit The 3rd Annual Commemoration of the WARP Summit was held under the theme, “Establishing Collaborative Governance for Development and Implementation of the DPCW.” The Summit aimed to increase awareness of the DPCW among intergovernmental organizations including the United Nations. Furthermore, the agreed upon standards for determining a trustworthy religious scripture, which is the key component of the comparative study of scriptures done at the WARP Offices, were presented and ideas for a global peace media network were developed. Overall, the Summit provided an opportunity to seek ways to establish a cooperative network among international organizations, governments, and civil societies. Each year, influential people from all around the world meet in South Korea. HWPL  was acknowledged for substantial and practical way to achieve peace. Actually, people who come to the Peace Festival are all moving. They can feel ‘Peace waves’, which also be called ‘the heart of peace’, deep down in the heart. The Key points of 3rd WARP Summit is ‘Card performance‘, ‘DPCW parade‘ and ‘Arirang of Peace‘ finale performance.

HWPL, the host of this event, is an NGO associated with the Seoul Metropolitan Government and the UN Department of Public Information and in Special Consultative Status with the UN ECOSOC. The organizers are the IPYG, an affiliated organization of HWPL, and the IWPG, a UN ECOSOC-affiliated NGO. Our slogan is “Together for peace as messengers of peace”. As this slogan, all IPYG and IWPG members work together for a world of peace and cessation of war. They show us the culture of peace with all their heart. Peace is not somewhere else. We are peace. You can experience the true culture of peace. Regardless of individual backgrounds, a culture of peace will foster understanding of harmony. At that time, We Can Be One! People from all nations and religions will become one through a heart yearning for peace. Q. What purpose and content did you plan in thins card performance?
“The reunification of the Korean peninsula was also a subject of this year’s event, which was held for the cessation of war and world peace. So, I planned a card performance containing this message in order for all guests watching to feel how much the people of Korea desire unification and world peace through this card section.” Q. What kind of hear are you working with?
“Many people from overseas come to attend this event, and their impressions of, and tears shed for, our performances are very exciting and moving for us. I’m truly grateful to be doing this work because the guests who watched the performance returned to their home countries boasting about our performance. It makes me think that I am doing the most valuable work in my life by delivering this message of peace.” HWPL DPCW‘s 10 Articles and 38 Clauses Parade, which consists of the key principles stated in the DPCW, expresses how the world of peace has come. Despite the long history of humanity, a perfect peace hasn’t yet to come. When tens of thousand people come together with a common goal, that goal begins to achieve. And I believe what is happening here is in this place. There are many parades! I introduce one of them.

Article 10 Spreading a culture of peace Peace Academy
The students who received peace education from HWPL are creating this place into a world of peace as “messengers of peace”. The HWPL Peace Academy teaches Peace of Mind based on dignity of Life. It is the best education that every human being is more valuable than the whole universe, isn’t it? How great DPCW Parade is! Q. You are creating a tank and a unification train. Which part of this should be viewed carefully?

“In the case of the tank, a key point to take notice of is how the cold and lethal weapons of death are transformed into agricultural tools that help people and give them joy. So, it becomes a world where there are no longer any weapons that kill people. In the case of the unification train, it shows how the unification of Korea, which is the world’s only divided nation, is able to give hope.

This is symbolized by the creation of a unification train which would allow people to go anywhere, not caring whether it is in South or North.” Q. Can you please introduce the performance that we will see from this Arirang Team?

“Our performance is a concert called Arirang Fantasy of Peace. It is a performance that expresses the idea of a peace that does not discriminate anyone, even though nationality, race, culture and religion may all be different. It brings together a traditional Korean song with traditional instruments, dances martial arts and other elements showing a harmonized global village full of excitement. This concert is a peace festival that represents the global village that will live in harmony and create peace.

It is during the performance of Ganggangsullae(강강술래), a traditional Korean dance, in the Arirang of Peace where one of our team members steps across the connected backs and shoulders of the others. This clearly demonstrates how a beautiful reality of peace is achieved through the combined sacrifice and effort of everyone involved.

Therefore, during practices not even one person could think selfishly, but instead had to willingly lend their back and shoulders. So, we carefully practiced with the mindset that I myself must hold hands and create peace along with everyone else.”

What will happen this year? This year at the 2018 HWPL World Peace Summit, thousands of leaders and citizens from around the globe will gather for 3 days in Republic of Korea with the great determination of creating a peaceful world together. Under the theme of “Collaboration for Peace Development: Building a Peace Community through the DPCW”, the wind of peace is blowing all over the world. We invite you all! to come and see the answer to peace in person! 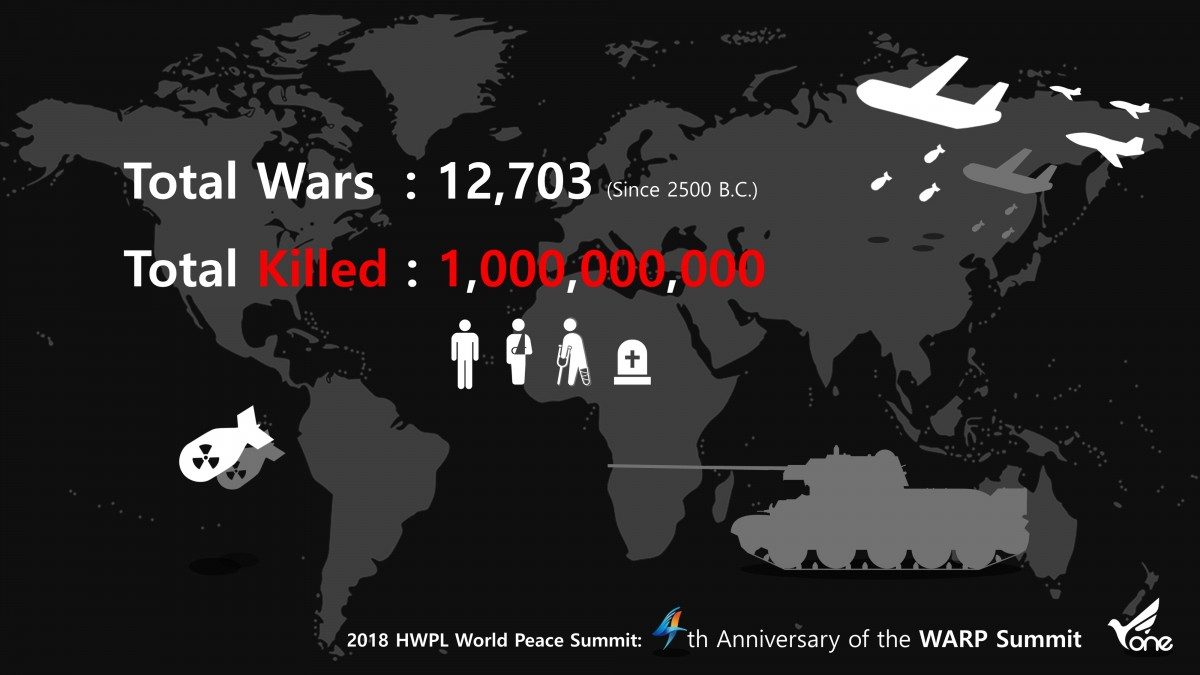