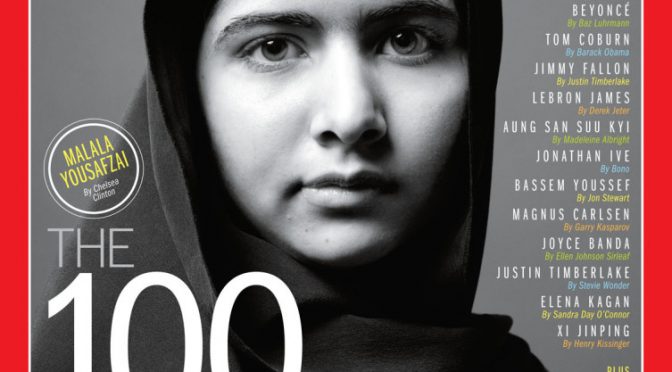 This time I want to introduce Malala Yousafzai. Do you know her? Hang on to your hats!!

She is just only 17 years old in 2014. She is the youngest Nobel peace prize winner.

Why she is so influential?

On the afternoon of 9 October 2012, Yousafzai boarded her school bus in the northwest Pakistani district of Swat. A gunman asked for her by name, then pointed a pistol at her and fired three shots. One bullet hit the left side of Yousafzai‘s forehead, travelled under her skin through the length of her face, and went into her shoulder.

In the days immediately following the attack, she remained unconscious and in critical condition.(From Wikipedia, the free encyclopedia)

But She recovered her health!!! It’s a miracle.

Her walk started at 11-12 years old. Yousafzai wrote a blog at that time to  change the world.

The world was in an uproar over this assassination.

It is a opportunity for her to change the world. In July 2013, she spoke at the headquarters of the United Nations to call for worldwide access to education

In February 2014, she was nominated for the World Children’s Prize in Sweden.

Later in 2014, Yousafzai was announced as the co-recipient of the 2014 Nobel Peace Prize, along with Kailash Satyarthi(From Wikipedia, the free encyclopedia) For her “Nobel peace prize is a beginning, not an end “

One little girl changes the world even now.

“One child, one teacher, one book, one pen can change the world.”

He is 44th President of the United States of America.

Anyone can shout such things. But the reason why winners are great is  that It is very difficult to do something more than words.

So I want to pay attention to his childhood story.

Do you know ‘Dreams From My Father‘?

It is his autobiography. He wrote it when the first black editor in chief of “Harvard Law Review”.

It is hard to summarize his youth. But his childhood is struggles as a young adult to reconcile social perceptions of his multiracial heritage.

The most important his concern was ‘who he was’.

I think there is a lot I can learn from him.

Do you know ‘We Are The World‘?

I’m Korean, but I know Michael Jackson and Stevie Wonder.

When I was young, I always heard about two persons. When he was born, His eyesight was lost. But His sustained effort made him a top singer-songwriter.

This two great persons sing ‘We Are The World‘

This is my favorite song. You would know what I’m saying only listening this song.

What I know is just ‘Cordiality‘.

They truly sing a song with their whole heart. What I feel is just their heart. They really want ‘PEACE‘ They shout ‘We are the world‘

I think of them when I am sometimes so stuffed or I am too comfortable. My shame is not yet dead.

Would you join with me?